I was intrigued to see this artist as a sculptor. The name Matisse usually brought up thoughts of paintings and drawings for me. So it was quite intriguing to see some of his sculpting pieces. This was part of a series, four female figures seen from the back, emerging slowly from the stone. Even though this is a different medium, you can still get a sense of the artist’s “flavor” and style. (Nude from the back stage 1, Henri Matisse 1909) 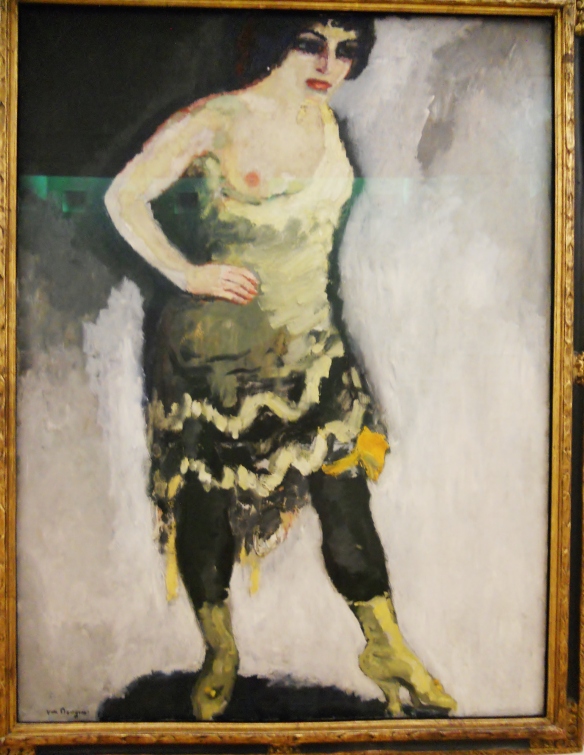 I was intrigued by the heavy line work of this piece. The outlines were anything but subtle. Even the lines in the face were hard, heavy lines. Something about the contrasting black, yellow and white made this painting stand out. (Nini, dancer at “Folies Bergeres”, Kees VonDongh, 1907) 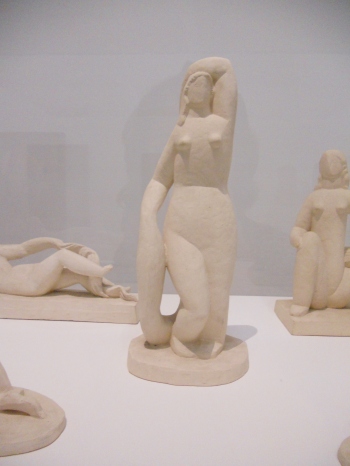 I liked the stylized figures of this artist. You could also see the progressing and simplification he was moving towards. The left hand sculpture predates the one on the top. You can almost see the creative process at work here. 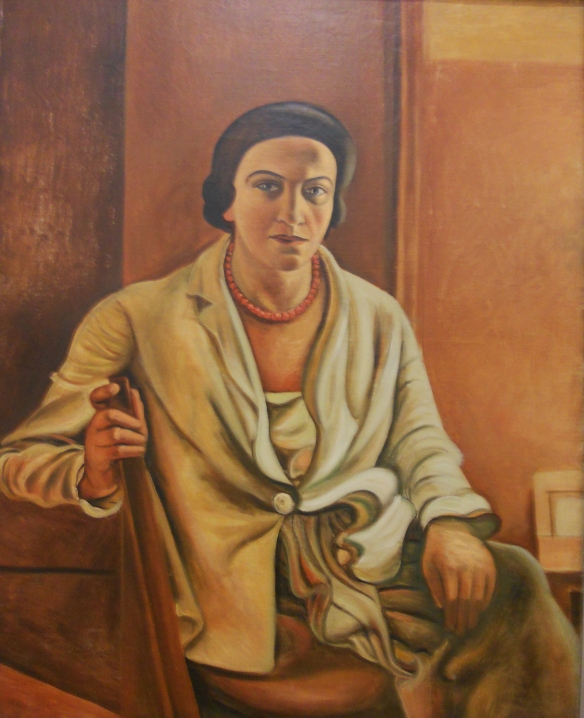 Here was another example of an artist having more than one specialty Andre Derain made a series of nude figurines (see previous post) but is obviously quite capable with a brush. Some of the facial features were similar between the two, but still. The similarities between sculpture and painting are not as clear as with Matisse. (Alice Derain portrait, Andre Derain, 1920)

Modern artists also used the female body as a means, integrating concepts and allegories in their pieces. Here, the artists is making a statement about reality contrasting with dreams and illusions. The female body is morphed and transformed. These last few slides present some of the strangest pieces I saw, a little puzzling and odd, some quite disturbing really but still original uses of the female form in their art. (“You shouldn’t see reality as I am”, Max Ernst, 1923)

Giacometti’s style was quite intriguing, pitted, rough surfaces, elongated and unnatural figures. Here is a woman, easily recognizable by her female attributes, but still in such a unique representation that I felt it was worth sharing.

This portrait grabbed my attention and I ended up standing in front of it for quite some time. This gave me a chance to see some of the reactions of over viewers. Some were disgusted, perplexed, curious or scoffing. But no one really understood. Reading the nearby sign I discovered that the artist Balthus loved to make a ruckus He was an innovator, promoting erotic art. Claiming that eroticism was different than obscenity. He wanted to shock his viewers and make them ponder the question of nudity and eroticism in art. However this piece was quite disturbing. The model was the wife of a close friend of Balthus. They had a rather ambiguous relationship. Another dimension was the title “Alice” referring to the child’s book. She is wearing little ballet shoes, like a little girl, yet her body is that of a full grown woman. Her blank, blind stare makes her particularly unnerving.

Bacon’s perspective was also a little off. A woman in a provocative pose, contrasting with the pure black darkness behind the doorway and seemingly melting away. He face was decomposing almost, the mismatched eyes and devious grin only added to the uncomfortable feeling you had when view this painting. (Female Nude Standing in Doorway, Francis Bacon 1972)

This was the last piece I wanted to share. An ephemeral ink and acrylic painting. There was something eyrie but fascinating about her. There was no story or interpretation offered here, leaving us free to imagine who this ghost like woman is, and to wonder what she might be thinking, staring back at the hordes of viewers passing by. She seems almost amused, with a slight grin, hiding some kind of secret we will never know. (Labeled, Marlene Dumas 1998)

The Pompidou center offered a very different perspective on the female figure. I also found that women were one of the most common themes in the art here. There’s something to be said about the fascination of artists with the female body, trying to represent it, change it and mold it into something new, but still expressing the natural beauty of the women in their lives. After the advent of photography, the art world changed completely. Artists were seeking a new meaning to creation, a new inspiration, and women played an important part in that search for a new art.
(Naked woman sitting, Georges Braque 1907, Fauvist movement with outrageous colors.)

Picasso’s vision of the world has always fascinated me. I simply marvel at the variety of his works, and so there are quite a few of his works here. The cubist movement was scorned and mocked, but I find it to be a show of technical prowess. It’s a much more challenging piece to admire and decipher, but definitely worth the effort. 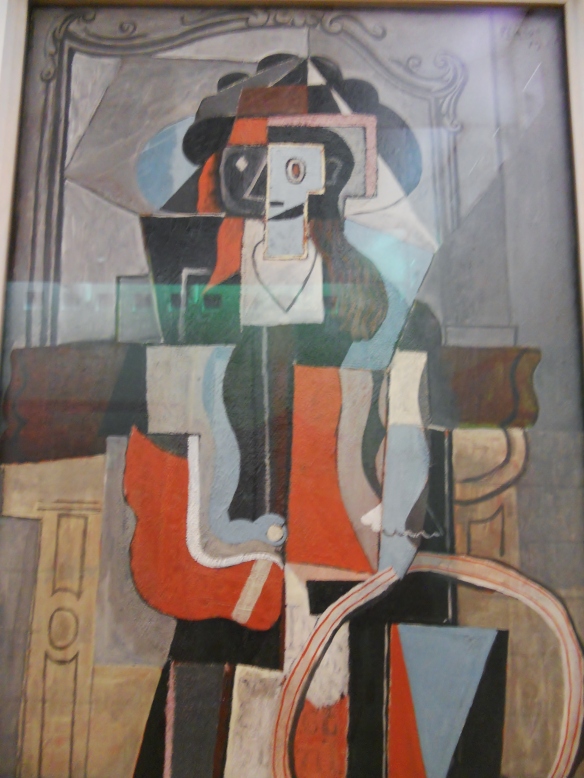 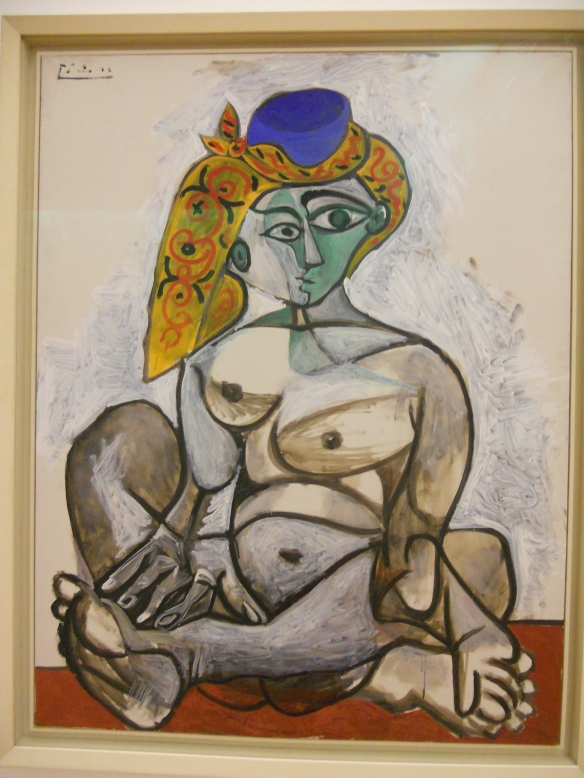 I liked this series of sculptures, marble and stone women, standing with tilted heads. The one on the top in embracing a lover. The perspective is a bit odd, it almost seems like the breasts are in the wrong spot, I was a little puzzled at first, but it was in the cubist exhibit, so perhaps it is just a different point of view than what we are used to. The figure on the bottom gives of a gentle softness with a smile.

Otto Dix’s works are always a little perturbed. But this one was especially so. The main characters are reflected multiple times throughout the pieces as if they are surrounded by mirrors, each reflection focusing on a different part of the strange couple. The strangest part of the piece is how the artists identifies the female here as a nun, making this representation of vice and hubris all the more shocking. (Soldier and Nun, Otto Dix 1916)