Scene of a ground breaking ceremony accompanied by a group of musicians. Drawn on a Papyrus scroll found in an Egyptian tomb.

Double flute. (was woven together with string at the mouth piece, but that part deteriorated too badly.)

Set of beautiful and surprisingly tall harps. Used for accompanying singing and dancing as well as religious ceremonies and private listening sessions in the home.

Some ancient games were also displayed, such as the Semet sets shown here with the original pawns. 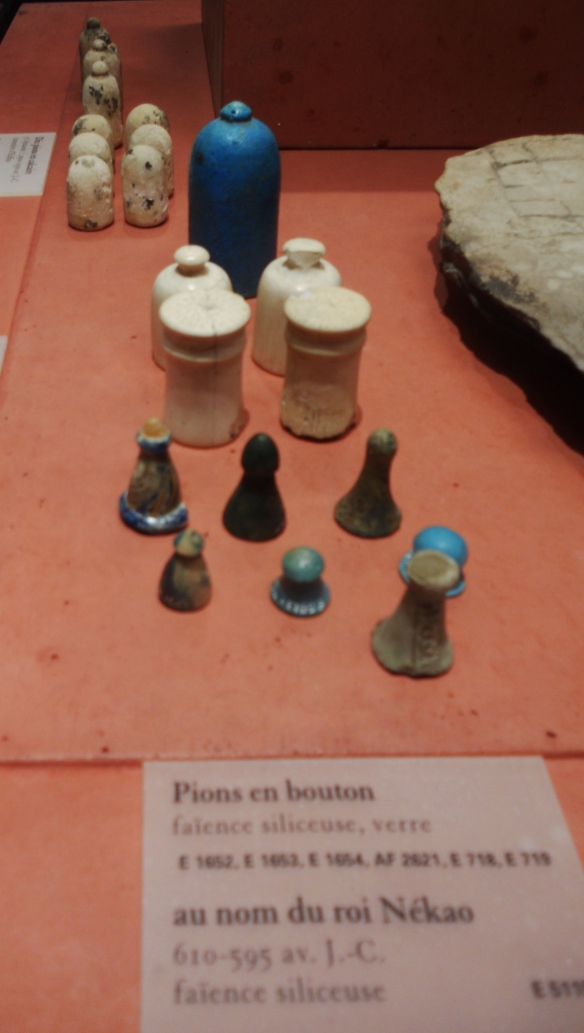 Some of the pawns used for the Semet game.

Ancient dice sets, very recognizable, as they are still used today. These could have been used to play a game called 58 holes. In the background you can see a very old ball.

It was delightful to spend some time wondering through these carefully preserved items. It made the Ancient Egyptian people more approachable, and real. Seeing that they were simple people with some of the same concerns as us, food, drink, beauty and pleasure, just makes them seem more alive today. Their art was very distinct and permeated every aspect of their lives, something that some in our modern days have forgotten. Hopefully their legacy will still be preserved for generations to come.

The museum had a few sets of jewelery and ornaments. They were set up in such a way that you could almost imagine them being worn. 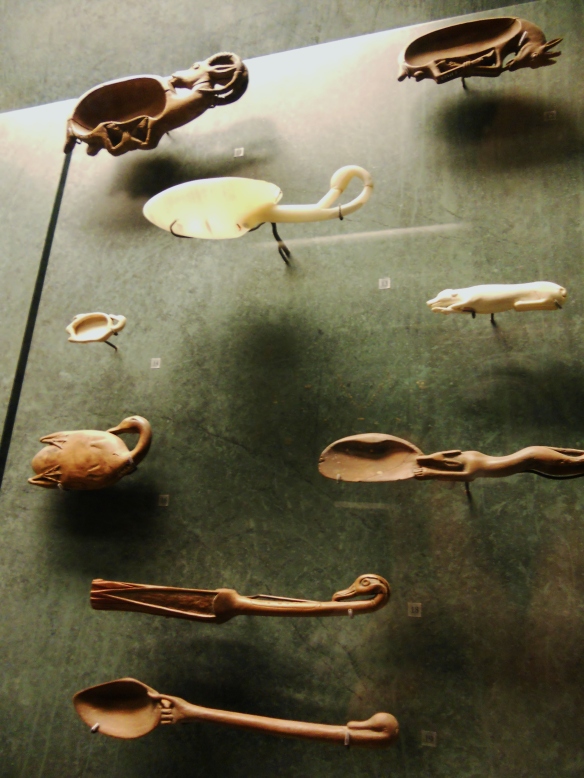 Here are some of my favorite pieces. These were elaborately carved spoons. Made of wood, ivory and sandstone. The spoons were stunningly beautiful. The details and decorations were positively stunning. This display was definitely one of my favorite.

These spoons could have been used for the preparation of black Kohl The Egyptian eye make up. It wasn’t simply a cosmetic fancy, but also helped reduce the desert sun’s glare. Once again it is unsure whether or not these items were actually used, or simply funerary gifts. 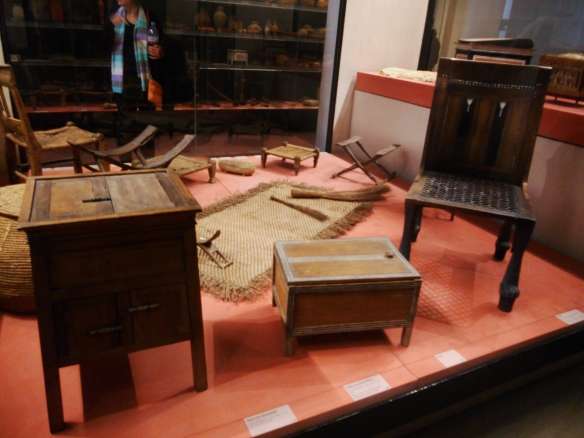 Actual pieces of furniture, put aside for the After-life, so they weren’t actually used but they give us a wonderful glimpse of Egyptian life.

Here are more of those baskets that impressed me. Used for containers, cheaper and lighter than clay. And still here after thousands of years. 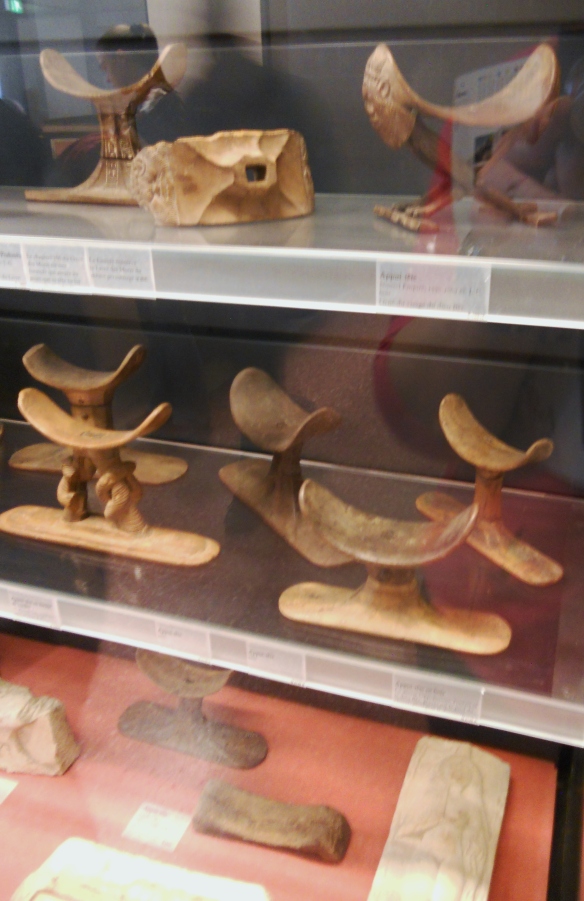 Here are different models of Egyptian neck/head supports. The ancient people didn’t use pillows but slept on their back with the wooden support holding up their head. Even though I can’t imagine this being in the least bit comfortable. There must have been a practical reason for this.

Here are a few decorated wooden chests, some were used to hold toiletries or herbal remedies and spices.

Once again these are beautifully decorated. There were very few plain objects anywhere on display. Everything was decorated. It might be because these where mostly objects found in burials, and therefore more ceremonial than used objects, but I’d like to think that this exhibit shows us a snapshot of the daily life of these people, who wished to surround themselves with beautiful objects during their lives as well as after-lives. 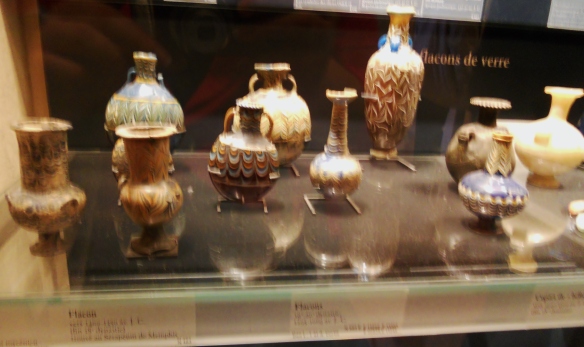 Delicate glass flask and jars filled this display case. They showed the glass techniques we read about in the book and was quite thrilling to see in real life. It’s bright and colorful and carefully detailed. Shame my photo came out blurry

Here were some tableware items made of mud and clay. These were simpler and a lot less elaborate than some of the other items. But they were also considerably older. I wished they’d had more explanations on the display, but this was only a temporary addition, because the museum was worried about basement flooding. How sad would it be, that something like this surviving nearly 5000, should be destroyed in a modern day basement flood? 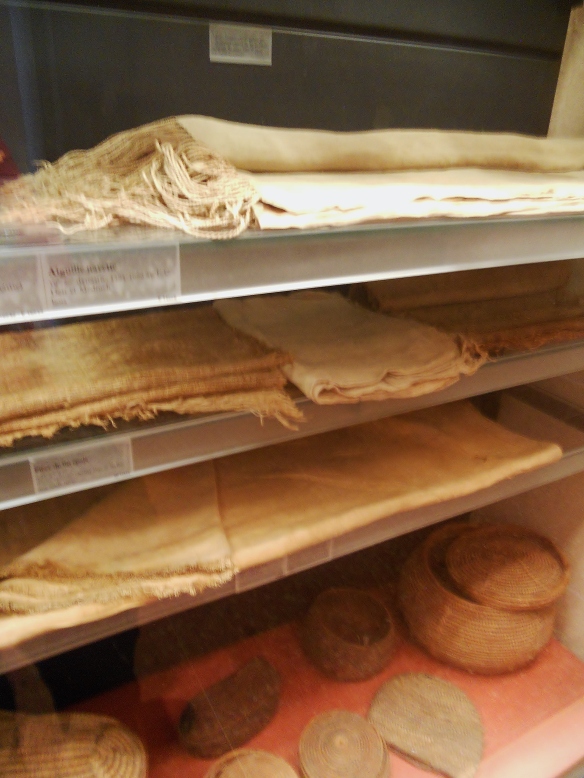 Some of the most impressive pieces were the fabrics, and woven baskets. It was mind blowing to be admiring these fabrics that survived over 3,000 years. 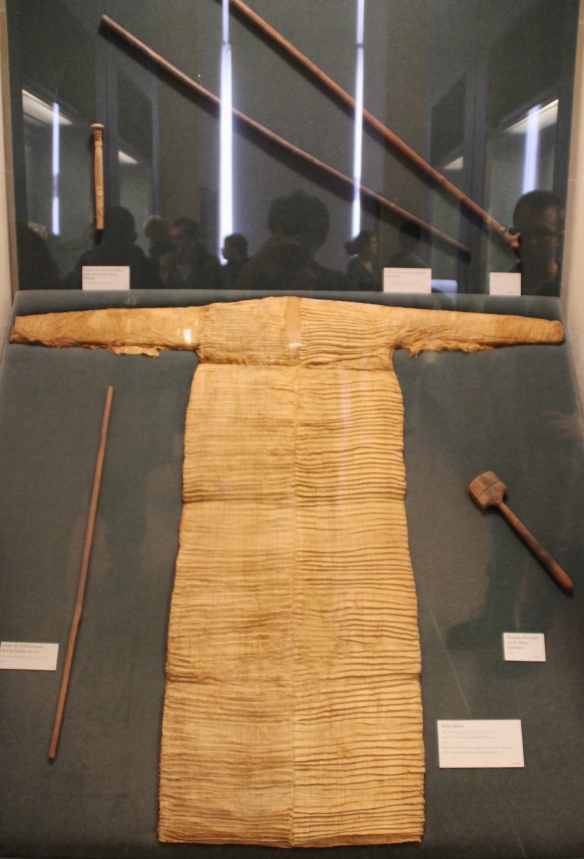 This pleated linen suit was found in an ancient grave and is of the typical Egyptian style. It was a sign of some wealth, and was apparently worn by a woman.

This display shows some of the typical fruits, grains and seeds the Egyptians cultivated and used daily. There are quite a few nuts, barley and flax. 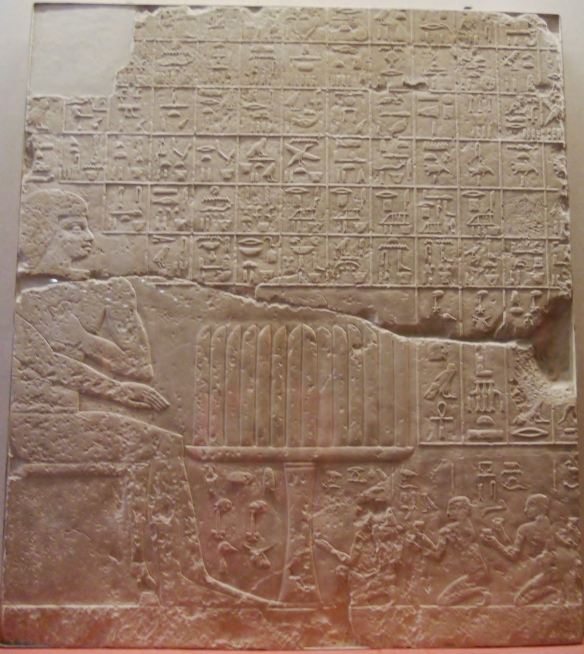 I saw this fascinating bas-releif describing the menu for an actual banquet held by the noble man, Tepemankh. It was such a memorable feast that it was engraved onto the wall of his tomb Unfortunately a lot of the names are local delicacies, pastries and cakes that have no modern equivalent. So we will never know half of the wonderful foods on this elaborate menu.

Beer was an essential staple in the Egyptian diet. Some scientists speculate that drinking beer daily might have helped prevent disease in the ancient land. The beer making process requires all water to be boiled. Making it safer for general consumption that regular pond or well water. Here we have a clay sculpture of the beer making process. 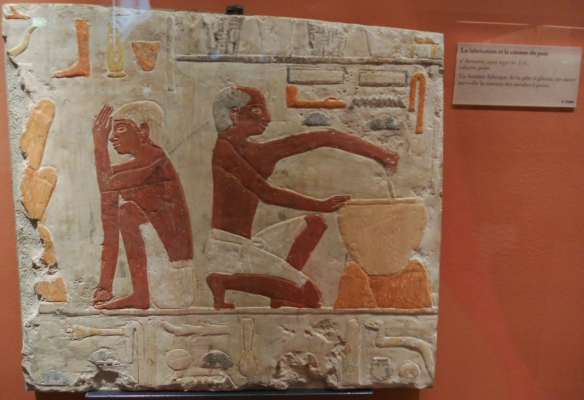 Bread was another major staple in most of the ancient Mediterranean world. And still is, to this day. On the left here we have a bas relief depicting two men making bread. One is preparing the dough in a big mixing bowl and the other is watching the bread baking in molds, ready to remove it from the ovens.

Here we can see the kinds of tools ancient Egyptians used to plow their fields. 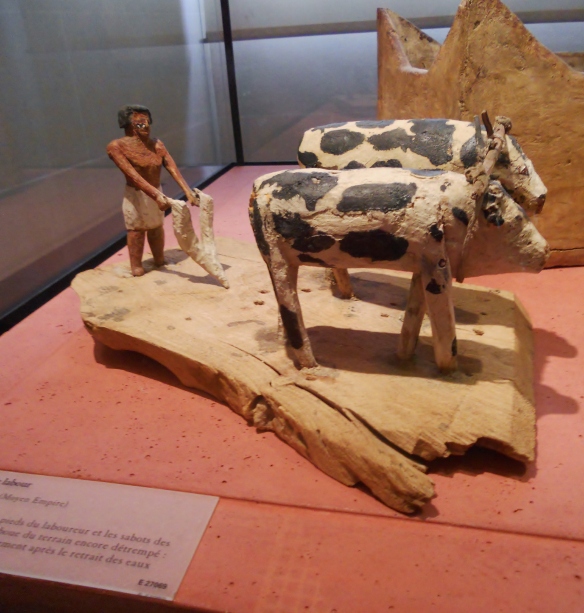 We can see a clay and wood model of the techniques they used. This also shows that the Egyptians had domesticated animals as well.

Here is another example of the domestication of animals. On this painted wall fragment we can see a heard of Ibex like goats, and their herders, probably leading them to the slaughter actually.

On this bas-releif we can see a succession of workers carrying the the fruits of the harvest, palms and fruits, as well as some fowl, geese or ducks of some kind. 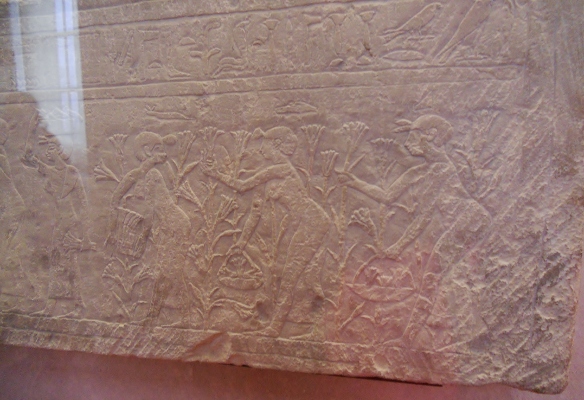 Here is a bas-releif of a group of women harvesting either reeds, the main component of papyrus or cotton to later be woven into linen. Not all Egyptian crops were food based.

On this fragment of painted wall we can see how the men harvested wheat. Also on the bottom register, they are replanting and plowing the field once more. I’m not entirely sure just what is happening in the top register. There’s a cow, and men carrying some kind of reed cages. It’s a bit of a mystery.

Hunting also contributed to the Egyptian menu. On the left we can see a wall painting with three registers, on the top a cow is being butchered, on bottom two we can see a cortege of Egyptians carrying all kinds of different foods, grains fish and fowl birds.

Just like the photo here, representing a ceremonial parade of women carrying food from the harvests and hunts to the temples. They are carrying fowl and grain.

We can see ancient quivers and arrows. It’s not visible on the photo but the metal quiver is engraved with a hunting scene of an Egyptian on a chariot letting arrows loose on some kind of gazelle or antelope. The wooden shafts of the arrows actually survived as well. I love how the Egyptians decorated their everyday items. They had a developed sense and love for the aesthetic.

Here are some daggers and axes. Some or the more elaborate ones were probably reserved for ceremonial uses but we can imagine very similar tools being used during hunting excursions. 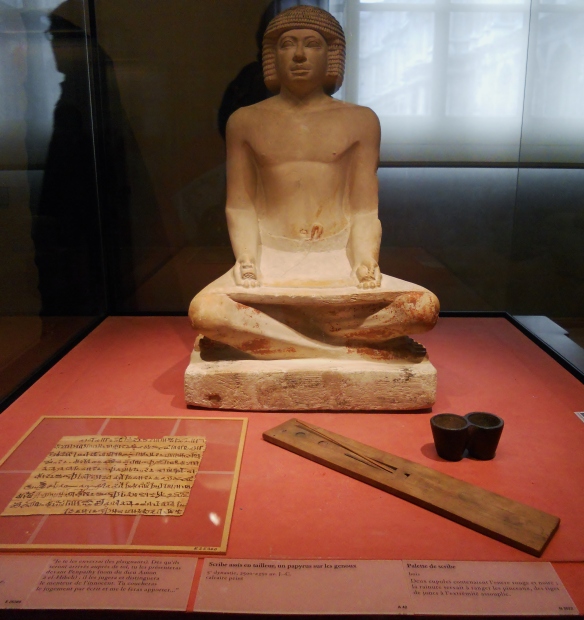 We talk a lot about Egyptian hieroglyphs, the profession of scribe was highly valued and indispensable. They were responsible for keeping all the records, be they historical or commercial, logistics and taxes. Seeing some of the tools ancient scribes actually used was pretty impressive. (, A scribe sculpture in traditional pose, writing palette containing “calames”, ink pots and a sample of hieratic writing)

(On the right, two writing palettes, the Alabaster one was for ceremonial use only.)

While in Paris I was on a secret mission for my art history class back home. I was to find an ancient civilization and do a project relating to their art. There was never any question about which Ancient Culture I would choose to do this project on. For as long as I can remember I have been fascinated with Ancient Egypt. But I wanted to find an uncommon approach to this culture, and so I wanted to stay away from any funerary art and not focus on the extensive mortuary culture. Luckily, the Louvre offered great inspiration. Walking through the ancient Egyptian section of the museum, I was surprised to find preserved furniture, baskets and fabrics. It’s a miracle that fragments of these have still survived today. It sparked my interest and I wanted to learn more about the regular everyday life of these people. I saw many beautiful objects that gave a glimpse of what ancient Egyptian life was like. So in this presentation I would like to show pictures of some of these items and share a few of my own thoughts. (By the way I took all the pictures myself so some are a bit blurry and there were a few reflections too.)

Life on the River Nile

The Nile was of great importance to the Egyptians. It flooded the fields, leaving behind fertile silt, making agriculture flourish. But it was also the main transportation and communication route. This wonderfully preserved model boat was quite impressive to see,  the delicate ties and trellis survived over two millennia.

Another aspect of the Nile river was the wealth of fish it offered. In the left picture, we see a bas-releif of an Egyptian casting the nets. We can also see an ancient net. It is not a reconstructed piece, but an actual 3,000 net and hooks found in a tomb. The fact that something so fragile survived truly impressed me.

Here, on the right, is a splendid painted bas-releif. It’s a little tricky to see, especially with the reflection of the glass. But here is a scene with a plethora of fish and aquatic animals in the process of being fished. The colors made this piece quite interesting, despite the damage.

What an adventure the past few months have been. I did in fact return from my trip to Paris. It was a lot of fun. Unfortunately my grand plans of massive blogging fell to the wayside once I realized that I had no internet access and too much socializing to do. Returning was a difficult process on its own, since I was very very ill for my flight back and had to stay in bed for a while to recover. One thing leading to another and here we are several months later and still no Parisy posts from me.

Deepest apologies, I will try and upload a few tips I found useful and share with you some of the beautiful art I saw. Things might not be posted in the order they happened, but hopefully you will find some of this information to be of interest. Or at least enjoy the pictures…

After Weeks of planning and a considerable amount of stress and mishaps. I’m thrilled to announce my up-coming trip to Paris, France.

Indeed my favorite place in the world. I have been there before and it is truly a place filled with beauty and history. Not to mention pastries to die for.

My plans include extensive museum attending and castle exploring. But still leaving enough flexibility to turn off my path and explore to my heart’s content. I’m trying to do some new things that I haven’t done before, so not the same old things, Eiffel Tower, Bateau Mouche, Versailles… nope! hope to explore a whole new side of Paris.