During my Paris vacation, I had a lot of fun simply absorbing the atmosphere and being surrounded by art and beautiful things to look at. I wasn’t quite sure how to approach this topic. Women have been a major theme and inspiration in every aspect of art and creation since the dawn of human kind. This topic is rather vast and I didn’t want to do something bland or impersonal. So I decided to go on a “Treasure Hunt” of sorts through the city and different museums to simply record the different women I would encounter, photographing the ones that struck me or spoke to me. And this is how I hope this project will be read, as simply an exploration, a walk through the figures that captured my attention. Enjoy!
(I tried to be as thorough as possible, but some pictures are blurry and some dates are missing, but I still wanted to include the image nevertheless because of its beauty or uniqueness.)

This ancient sculpture was apparently the stereotype of the female form, made  around 6000 bce, this was one of the oldest I found.  She has a generous, curvy figure  sign of abundance and is comfortably seated with her legs crossed.

This figures date back to 2,700 bce from the Island of Keros. We saw similar things in our book, the stylized, recognizable but impersonal figures of these women. They all have the same poses. The museum also mentioned finding very slight paint residue on the Marble faces of these anonymous women.

The Mediterranean Basin in Ancient Times

This funerary stele was moving to me. I saw a lot of funerary art during my couple trips to the Louvre, and it should be a topic on it’s own. These grave markers are a snapshot of past lives, and I found it touching to find this couple, husband and wife, carved in stone side by side for eternity, or at least, as long as the stone would last. Testament to this ancient love. (130-140 C.E. Lebanon) 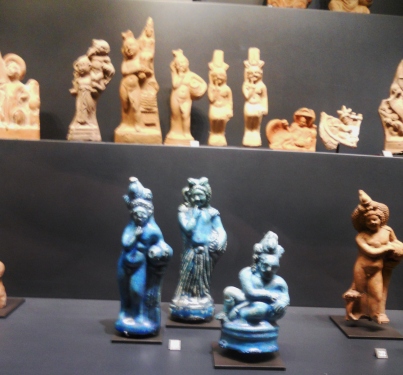 These figures were magical talismans, promoting protection or healing. They fascinated me since they represented Egyptian, Greek and Semitic deities but in outrageous, caricatural and crude forms. These little figures were meant to attract the anger of supernatural forces being mocked, in order to distract them from plighting the owners instead.

These intricate female heads caught my eye. They were meant to be bodiless, representing a Greek ritual of sacrificing locks of hair. Little wonder since each and every one has an elaborate and carefully fashioned hair style. Most of these were found in burials, and are assumed to represent the sacrifice of loved ones to insure the safety of the passing soul. They are an appeal and a prayer to female, mother-like deities such as Isis and Aphrodite. (Found in Egypt and dating back to the 2-3rd century c.e.)

This third century bronze embodies a culture much different from ours, where female goddesses were praised, worshiped and depended upon. Here we have a statue, blending the features of Isis and Aphrodite, showing a Mother figure with gentle curves, open arms and a soft smile. The Isis-Aphrodite cult was quite important in the ancient world and spread from Africa to England, all the way up the Middle East, showing a passion and love for the female aspect of the divine.